Spread love. Not fear. Spread hope. Not defeat. Your words are powerful. Choose them wisely. It’s possible to crush someone’s dream with a single word. Offer encouragement whenever possible. And always extend that courtesy to yourself. 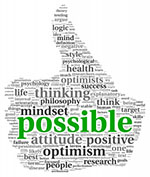 ut your own life with words of love, hope, kindness, and inspiration. You could use affirmations like: “I love and approve of myself…I trust my inner wisdom in making good decisions today…I know that it’s okay to make mistakes along the way, because I can always learn from them…My life is full of promise.”

Our subconscious mind is absorbing every word we say to ourselves. So be mindful of how you’re programming your brain. Negative belief systems can run like buggy software in the subconscious, sabotaging us on a daily basis. So maybe it’s time to download some more beneficial beliefs about yourself, the world, and your place in it.

You can start in this moment by shifting your thinking.

Did you know it’s estimated that we have more than 60,000 thoughts a day? Well, about 95 percent of these are the same ones we had yesterday and the day before that. Then we wonder why our lives don’t change.

It’s been said that the definition of insanity is doing the same thing over and over and expecting different results. So you can imagine what the impact will be of continuing to tell yourself things like: “No one cares what’s happening to me…No one listens to what I have to say…I always mess things up…I never get paid what I’m worth…You can’t trust anybody anymore.”

Those beliefs become self-fulfilling prophesies. Every time we think those negative thoughts, they immediately influence our feelings, which affect our motivation and actions. The energy of that thinking also has a powerful effect on how others interact with us. What we think about ourselves and others can quickly become true for us.

So what kind of reality do you want to create for yourself? Think carefully about it. Then continue to choose thoughts that are in congruence with that future you’d like to build (improved health, relationships, career prospects, etc.). 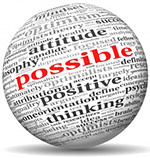 You don’t have to monitor every thought. That could get exhausting. But pay attention to your feelings. If you start feeling anxious or sad, stop and notice what you were just thinking about. The thought always comes before the feeling. Our thoughts are immediately communicated into our body, affecting our energy and health.

Keep in mind that negative feelings can be momentarily beneficial, if they remind us that we need to make changes in our lives. But we have to remember to shift our thinking in a positive direction once we’re ready to move past the emotion.

So if you catch yourself feeling defeated and thinking, “I just feel so stuck,” try changing the thought to something like: “I have great potential. I know I have the power to make positive changes in my life.”

Or look for inspiration in the words of others. Like poet Maya Angelou:

NOTE: Louise Hay’s book, You Can Heal Your Life, is a wonderful resource on positive thinking. Hypnosis can always be a very helpful technique. At Wellspring Reiki & Hypnotherapy, we provide recordings of the affirmative parts of hypnotherapy sessions to help reinforce the changes you’d like to make in your life. These recordings can serve as a powerful guided meditation to both relax and inspire you.

Sometimes we just have to move on. There may be people in our past that did not do right by us. Waiting for them to change – to step up and do the right thing – might take a miracle (or at least a few more lifetimes). Why wait any longer?

The definition of insanity is doing the same thing over and over and expecting a different result. Don’t drive yourself crazy by dwelling on someone who wronged you in the past – or repeatedly dealing with someone who is never going to have your best interests at heart.

One of the Spiritual Laws of Detachment is: “When it’s over, it’s over. We tend to hold on to people and events that are in the past.” So ask yourself if you need to cut the energy cords with any of your old relationships. It’s widely believed that we form etheric energy cords with significant people in our lives. 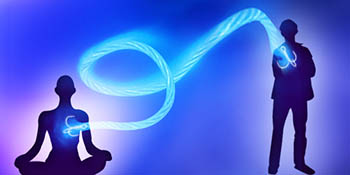 These cords may continue to exist with people you haven’t even seen in years. So why are you still holding on to some degree? Maybe it’s time to set each other completely free of the old negative energies (the bonds) that have been holding you back. Maybe it’s time to start moving on.

One example I can give is of a close friend I met just after graduating from college in 1993 – a time when I still had a lot to learn about carefully choosing my company. He had a lot of intelligence, artistic talent and humor, but ultimately all of that was far outweighed by his breathtaking sense of entitlement, almost total lack of gratitude, repeated lack of respect for himself and others, addiction issues, and slight sociopathic streak.

Even after we moved to separate cities, we remained in close contact by phone, and I would listen for hours to his problems (the same patterns week after week, year after year). He eventually joined AA and seemed to be doing better in some respects, but he volunteered the information that he would never complete step 8 (the one where you call and ask forgiveness of people you may have wronged).

I wasn’t so surprised. This wasn’t someone with a strong sense of accountability.

So when we had a falling out after I called him out on some of his “stuff” during an eye-opening visit, I just knew we were done. I’d be willing to apologize for my part, but why continue a relationship in which the other party has an almost complete incapacity to do the same?

A number of months after he returned home, I did receive an e-mail saying he wanted to talk. But I just didn’t want to go there. On the other hand, I thought, “I’ve been friends with this person for 15 years. Can I just give that totally up?”

I discussed the matter with a very wise friend of mine, and she posed this powerful question to me: “If you were just now meeting this person for the first time, would you decide they were someone you wanted to play a significant role in your life?”

Without hesitation, I blurted out, “Oh, God no!”

I had my answer. I cut the cord. And almost five years later, I haven’t looked back. But I forgive that former friend, and I wish him the very best.

Forgiveness of these people doesn’t necessarily let them off the hook – there’s still karma to deal with, after all. But that forgiveness means that they no longer have control of your life. You can move from dwelling on the “Why?” into saying an emphatic “Goodbye!”

I encourage you to try a simple visualization exercise, asking Archangel Michael for assistance with this cord cutting. Michael, who’s always available to call on when you need protection and support, is often depicted carrying a mighty sword. Ask him to please help you cut the cords on relationships that haven’t served you well. 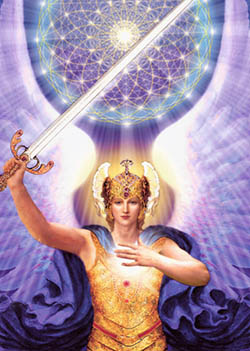 Just close your eyes, think of a particular person, and imagine where their energy cords might be connected to your body. Go with the first place that comes to you (it’s the intention that matters most, not precise specifics). If you see them attached in many places (for instance, at your head, shoulders, and heart), then see those cords intertwining like a rope a foot or two out from your body. Then visualize Michael’s sword of light easily – painlessly – cutting through them all.

Ask Michael to lift those cords up into the heavenly light, so that those people can draw energy from a higher, limitless source. Take comfort knowing that you no longer have to be drained. Then visualize a beam of heavenly white light filling up the areas where those cords were once attached, healing your energy field.

You might find you need to repeat this exercise. You or the other parties might be tempted to reconnect energetically (even from a distance). Sometimes people can really tell that something has shifted and might start searching for another outlet to plug into you (even remotely). At those times, you might find them popping into your head.

If that’s the case, simple close your eyes and repeat this exercise. The process can take less than a minute, but the benefits may continue for years as you move away from the past and into relationships and situations that are healthier and happier.

There may be other people in our lives (coworkers, neighbors, family) that we can’t stop seeing. We may need or want to continue these relationships, but we can still cut the cord on unhealthy attachments between us. Just repeat the same process and ask Michael to lift those cut cords into the heavenly light, which others can draw upon for energy. You no longer have to be drained by their neediness – to feel the pull of their guilt.

Imagine having a conversation inside your head with their Higher Selves about what needs to change in these relationships (relay that information into the collective consciousness, and you can count on it being heard at some level). Be open to hearing the other person’s point of view, too.

You might even find the relationship improving in ways you never expected as you set and enforce your personal boundaries. Every day, visualize your body sealed in a bubble of white light that protects you from negativity and energy vampirism – but that is permeable by love and positivity.

“When people say “Let it go,” what they really mean is “Get over it,” and that’s not a helpful thing to say.”

“It’s not a matter of letting go – you would if you could. Instead of ‘Let it go,’ we should probably say ‘Let it be’; this recognizes that the mind won’t let go and the problem may not go away, and it allows you to form a healthier relationship with what’s bothering you.”

– Jon Kabat-Zinn, founding director of the Stress Reduction Clinic and the Center for Mindfulness in Medicine, Health Care, and Society at the University of Massachusetts Medical School