Surrounding and permeating everything in the universe is an ever-changing sea of energy. Our bodies are like sponges for this force, which our personal energy fields  (or auras) absorb through energy centers called chakras.

Awareness of the chakras dawned long before the New Age. They have been an integral part of yoga philosophy in India for millennia. 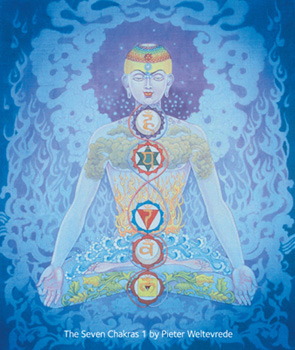 In the Indian language Sanskrit, the word “chakra” (correctly pronounced chock-ruh but commonly called shock-ruh) means “wheel of light.” That’s how chakras look to those sensitively gifted enough to see them – like spinning wheels of colored light.

Positioned along the spinal column, the major chakras form the backbone of the network through which the mind, body and spirit act as one holistic system. This network includes many smaller energy centers throughout the body that often correspond with acupuncture points.

Reiki and the Chakras

The hand placements of Reiki healing often target the seven major chakras and important secondary chakras, which are often rendered dysfunctional and discolored – even almost completely closed – by problems of the mind, body or spirit. Keeping these gateways properly functioning is vitally important to our health, because disruptions in energy flow lead to illness.

When Usui first developed Reiki in the early part of the 20th century, Japanese culture didn’t think of the body’s energy system in terms of chakras (which include the body’s seven major energy centers as well as important secondary ones).

The Japanese focus was more on the hara between the naval and top of the pubic bone. This area includes a tanden that is the body’s center of gravity. There are also tanden at the center of the chest (heart) and just above the brow area (third eye) that Usui emphasized as well.

However, the ancient understanding of the chakras (borrowed from yoga philosophy) has proven to be a valuable addition to the practice of Reiki around the world. Today, the way Reiki is most commonly practiced in Japan takes into account the importance of the chakras (three of which correspond with the three tanden).

Energy flows both into and out of the aura through the chakras. The aura – the colorful, luminous body of energy enveloping and pervading each of us – is composed of at least seven layers, each of which deals with different aspects of our being (physical, mental, emotional or spiritual). The major chakras extend cone-like from the core of the spine through all of these layers.

In the physical body, the position of each of the major chakras corresponds with an endocrine gland controlling hormonal balance and a major nerve plexus.

In ascending order, these chakras are located at the base of the spine (root chakra), between the genitals and naval (sacral chakra), a couple of inches above the naval (solar plexus chakra), the center of the chest (heart chakra), middle of the neck (throat chakra), just above the brow area (third-eye chakra), and top of the head (crown chakra).

The body’s many minor chakras (there are well over a hundred) include pairs behind the eyes, near the ears, behind the knees, and on the soles of the feet and palms of the hands. Anywhere there is a joint, there is a chakra, so the hands contain many energy centers.

The palm chakras are the ones through which Reiki healing energy is directed. Once a master teacher attunes you to the source of Reiki, intention is all that is required for you to channel this energy. It flows into your body through your crown and heart chakras and out through your palm chakras to wherever you direct it (to specific parts of your body or to others).

Each major chakra on the front of the body is paired with its counterpart on the back. Together they are considered to be the front and rear aspect of one chakra. The root and crown chakras can be considered paired because they are the open-ended points of the body’s main power current, which runs up and down the spine and into which all of the chakras point (see the diagram below).

The seven major chakras are associated with specific aspects of our consciousness. Here are their chief characteristics and functions:

The root chakra grounds us in physical existence (our bodies and the material world). Balanced root chakras result in a healthy desire for the basics of life (food, warmth, shelter, etc.) When this chakra is imbalanced, we may be afraid of life, withdraw from physical reality, feel victimized, operate in a highly selfish mode, or be prone to violence.

Dysfunction of this chakra also can lead to problems of the feet, legs and lower back.

When properly functioning, this chakra fuels our emotions, creativity and sexuality. We feel vital and spontaneous, ready to seize the moment. Imbalance of this chakra can result in over-indulgence in sex or food, sexual or reproductive disorders, and feelings of jealousy and confusion. Self-esteem issues can also affect this energy center.

Strongly associated with intellect, the solar plexus chakra is also the seat of our personal power. When this chakra is open and balanced, its energy helps us transform our hopes and aspirations (especially material ones) into reality. We feel self-confident and have a clear sense of purpose. Dysfunction of this chakra can result in insecurity about physical and financial matters and the need to dominate others. Physical problems associated with its imbalance often include digestive disorders.

Acting as the bridge between the physical and spiritual worlds, the heart chakra is the center of love and emotional well being. When this chakra is functioning optimally, our ability to give and receive unconditional love is well developed. We are compassionate. Dysfunction of this chakra often results in feelings of sadness, fear and anger and can lead to heart disease.

We may overindulge in eating and drinking to keep a non-communicative throat busy and suffer from respiratory diseases, dental disorders, and low self-esteem. Feelings of anger, hostility and resentment also are associated with the imbalance of this chakra.

An open third-eye chakra is the source of our intuition and clairvoyance (vision beyond ordinary sight) as well as our ability to visualize and manifest. Blockages of this chakra abound, resulting in fear of the imagination, dreams and our “irrational” intuitive insights.

Physical symptoms of third-eye imbalance may include persistent headaches (especially in the center of the forehead), insomnia, anxiety and depression.

The crown chakra is our direct connection to spirit. When it is highly developed, we fully understand the “oneness” of universal existence and experience true inner peace. The illusion of separation between ourselves and other beings dissolves.

Expansion of the crown chakra enables us to tap into the highest sources of spiritual wisdom and enhance our claircognizance (psychic knowing). Blockages can result in feeling lonely, fearing death, and needing to compare ourselves (often unfavorably) to others.

For more about Reiki, please read these other informative pages: