I have come to realize that forgiveness often needs to be a process of repetitive intention.

Occasionally someone we might have considered forgiven from long ago can slip into our consciousness. And if we dwell long enough on that past situation, it can reawaken old feelings.

Getting into those emotional states accesses our subconscious mind, the reservoir for our memories, feelings, and habits/reactions. Our subconscious has trouble differentiating between what’s past, present or future, so an old hurtful situation can seem as fresh as five minutes ago if we give it enough energy. You could get as angry, sad or fearful right now as you were 20 years earlier.

Therefore, as soon as you catch yourself thinking about someone you’ve forgiven in the past, remember that you’ve already let it go. Hand the situation over to your Higher Power again to help with your healing.

Say to yourself: “I’ve let it go. I choose forgiveness. God, please help me continue to heal from that situation and fully understand the lessons I needed to learn from it.”

One person I occasionally have negative thoughts about is a toxic boss I once worked for at a nonprofit organization in North Carolina. If I dwell on some of her slimier behavior (and there was more than enough), I could start feeling really indignant. Fourteen years later, I could possibly even feel an urge to fire off an unconstructively critical email.

Of course, I wouldn’t really do that. After a second of satisfaction, I’d immediately regret it. Ultimately, that action would be far more harmful to me than her. She’s surely moved on with her life, having scarcely thought of me since. Why shouldn’t I set myself free?

So whenever I think about her (which is rarely these days), I reflect on how she was actually a blessing in disguise for me, because she finally motivated me to get out of my comfort zone and build a life in a new city (and ultimately a new career). Her toxicity was a kick in the pants at a time when I really needed one.

The experience also taught me how to better deal with cold, emotionally disconnected personality types, not to mention trusting my feelings more than someone’s words when I sense dishonesty. In short, I learned how to spot a fake snake.

Focusing on what I gained from that relationship – a better understanding of how to deal with difficult people – creates an entirely different feeling than anger (one of almost gratitude). I’ve even sent her a nice note in the years since: “Was just thinking about you. I hope life is treating you well. I learned a lot from working with you.”

Part of what I learned was the importance of forgiveness and letting go of the past. By forgiving that former boss I’m not saying it was okay the way she treated me and other people in the office. That is her own karma.

Instead, I’m setting myself free. Letting go of that resentment means that she no longer exerts any control over my life.

Therefore, that forgiveness is really more for me than her. It’s a gift to myself. I like to open that present every day.

Over time, as you repeatedly forgive people from the past who might pop into your head, you’ll find yourself thinking about them less and less (the mental and emotional muscles associated with them learn to relax).

The energetic cords connecting you to them could also fray like rope and finally separate. At times you find yourself thinking about someone you’d like to release, try asking Archangel Michael to cut the cord with his mighty sword. He is always available to call upon for assistance and support. Imagine him carrying off that severed energy cord up into heavenly light, freeing you from the past.

There are, of course, numerous times when we have to forgive people who maintain a presence in our lives (romantic partners, family, friends, or colleagues). The process of repetitive intention in forgiving them works the same.

For example, I can point to a close friend (whom I’ll call Audrey) and share her story of learning to forgive her father through the years. A minister who was more focused on his congregation than this family, her father didn’t value the qualities that made Audrey special: her artistic abilities, adventuresome spirit, and keen intuition, just to name a view.

“It was very hurtful to realize that he didn’t want to know me,” remembered Audrey, now in her early 50s. “One of the primary people in your life repeatedly making you feel invisible is about one of the worst things ever. But he didn’t realize that he was doing that, and he didn’t how to do anything else.”

“What finally helped me forgive my Dad was imagining him as a tiny child and recognizing what his life had probably been like growing up,” explained Audrey, noting that her father had been raised by a hired nanny and only seen his parents when on his best behavior. “He never got that sense of closeness and total caring.”

She added: “Realizing that made me feel overwhelmingly sad for him because I recognized how he got so disconnected from people. Now I remember to forgive him all the time because I understand where the deficiency comes from. I’m so grateful I don’t have that same disconnect.” 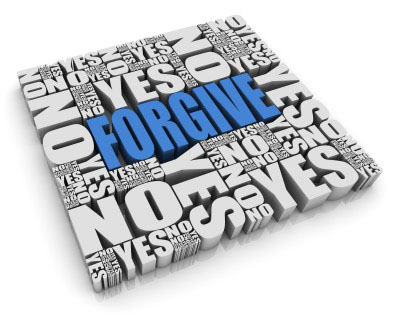 During the course of working with hypnotherapy clients through the years, I’ve encountered clients who suffered a lot of physical and emotional abuse from their families and others during their formative years.

I often employ regression therapy techniques that enable clients’ subconscious minds to find the past experiences that are closely associated with the root causes of problems they would like to solve (not feeling worthy, confident, capable of trusting, able to speak up for themselves, etc.).

Some memories that surface reflect relationship problems that might be easier to forgive than others. One woman remembered being four years old and winning a child beauty pageant. At the time, instead of praising her, her mother disparaged her by saying, “You didn’t deserve to win!” (a lack of approval that remaining an ongoing issue). A much more extreme example was a woman who recalled the time, at age 6, when her mother dismissed her claims of sexual abuse by a relative as lying.

Those situations were ones that neither client had thought much of in years – but that had made deep imprints on their minds, continuing to affect their lives in seriously limiting ways well into adulthood.

Bringing such memories to the surface in hypnotic regressions isn’t scary because the clients aren’t really reliving the situations. Instead, they’re viewing past traumas from an adult perspective. And as adults, they have an opportunity to give their inner child (the subconscious mind) the love, approval, understanding, forgiveness and help they have always deserved.

They also frequently gain insights into their parents and others that can make it easier to forgive those people (if they’re ready). Or at least be willing.

Perhaps a situation is still too fresh to fully let go of and forgive. If so, you could try easing into the process with this helpful affirmation from spiritual author Louise Hay: “I don’t have to know how to forgive. I just have to be willing to forgive. The Universe will take care of the how.”

Just the intention of forgiving begins the healing.

Sometimes we have to remember to forgive ourselves as well others. We’ve all made mistakes in our past. There are times when we all could have treated other people better – when we could have made better decisions.

Instead of mentally beating yourself up again, remember to think: “I am human being and therefore a beautiful creation of God. All of God’s children deserve forgiveness. So I forgive myself right now!”

But getting to that place of mentally forgiving ourselves can take some time. I recently made a stupid mistake that, while not huge in the grand scheme of things, haunted me for an entire day. What happened is that while feeling tired and distracted, I didn’t keep a close enough eye on my wallet at the gym. Normally extremely vigilant about keeping track of all my possessions in that environment, I suffered a momentary lapse (even though I used a lock).

Either someone with lightning-fast speed snatched the wallet from my open locker when I stepped four feet away to glance in the mirror for a few seconds. Or the wallet fell under the locker-room bench before I began my workout, and someone decided to keep it rather than turn it in to Lost & Found once they realized it had $260 in cash inside. I almost never carry cash, but I’d needed to make a deposit.

Over the course of the rest of the day, I went through the various stages of dealing with the $260 loss in accelerated fashion (denial, anger, depression, bargaining, and acceptance).

Even though I felt so stupid about having lowered my guard, what helped me reach acceptance was the gratitude of knowing that I had not been physically harmed in this robbery; that I could attract the energy of that money back to myself (manifest more); and that I had not lost my integrity (something the thief was willing to sacrifice but could not take away from me).

I was also grateful for enhanced perspective on this topic of forgiveness. It’s easy to advise someone: “Oh, you made a mistake. That’s okay. Just pick yourself up, carry on, and don’t look back.”

But what if people make much bigger mistakes? For example, taking an investment risk that costs them a huge chuck of their retirement savings, or causing a motor vehicle accident that leads to a lifetime of pain or decreased mobility for someone involved. Letting go of regrets and forgiving themselves could take significantly longer for those people.

Entitled to Your Feelings

What we have to remember is that it’s perfectly okay to experience emotions like disappointment, sadness and anger when we’ve made mistakes or when others have hurt us or let us down. Expressing our feelings is much healthier than shoving them deep down inside. As human beings, we are entitled to the full range of emotion.

But at a certain point (sooner rather than later) we have to move into acceptance of a situation (whether someone left us, fired us, cheated us, or whether we messed things up ourselves). We have to be willing to forgive. And remember to reinforce that forgiveness as necessary.

As noted before, reflecting too long on negative interactions from our past can put us into the emotional state of reliving the experience. What’s more, we can inadvertently enter the energetic vibration of attracting more of the same experience. And who wants that?

In addition to remembering to forgive when negative thoughts of the past surface, it could also be helpful to remind yourself of the lesson learned (something that can continue to serve your life well today rather than being fear-based or limiting in some way). Focus on the positive lesson instead of allowing negative feelings to fester.

If we’re forgiving ourselves, we have to give ourselves permission to let go of the guilt. Ultimately, guilt is such a wasted emotion. It doesn’t solve anything or make anyone feel better.

Another important reason to remember to forgive as often as needed is to help prevent resentment from digging deep roots into your cellular memory. Did you know that long-standing resentment is widely considered a major cause of cancer? The anger that keeps eating at someone can lead to tumors, which literally eat away healthy issue. And nobody wants that!

Give yourself and others a present instead: The gift of forgiveness. That’s what we all deserve and will ultimately receive. Why wait any longer?

3 thoughts on “Process of Forgiveness”